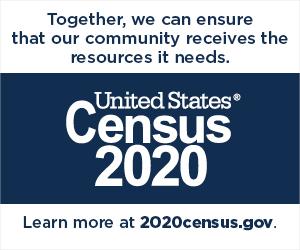 The 2020 Census is here and it’s not too late to complete it! It is important to fill it out so that local agencies (PPLD included!) have accurate information to use when designing community services. It's safe, easy, and required for all citizens to fill out.

In March, homes across the country received invitations to complete the 2020 Census with instructions for responding to the census online, in the mail, or over the phone.

Remember that April 1 is a reference date, not a deadline to respond. When you respond online, by phone, or by mail, count everyone living in your home as of April 1, 2020.

Beginning in August 2020, households that haven't responded yet may receive an in-person visit or call from a Census Bureau employee to help make sure everyone is counted.

Here’s a quick refresher of what it is and why it’s essential that everyone is counted.

Census data are being used all around you:

Your privacy is protected.
It’s against the law for the Census Bureau to publicly release your responses in any way that could identify you or your household. By law, your responses cannot be used against you and can only be used to produce statistics.

The Census Bureau uses a different method to count people in group living situations, called “group quarters,” such as college student housing, prisons, military barracks, and nursing homes. People experiencing homelessness (and who are not staying in a household) will be counted at the places where they receive services, such as shelters and soup kitchens.

2020 will be easier than ever.
In 2020, you will be able to respond to the census online. The online questionnaire will be available in 13 languages.