Manitou Springs Library: Planning for the Next Century 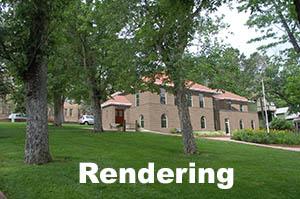 After receiving six proposals, a team led by Architect Roger Thorp of Thorp Associates was selected by the City in July 2016 to develop plans for expansion and remodel of the historic Carnegie Library.

The team held a series of public meetings to obtain feedback and information from the community. They then took the public input, and that of personnel from the Pikes Peak Library District, which operates the Manitou Springs Library, and developed over the last five months several versions of expansion plans. The final draft proposal was presented to the Manitou Springs Historic Preservation Commission on December 7, at which time the Commission unanimously approved the conceptual design.

To view a larger version of the rendering seen at upper-right, click here.