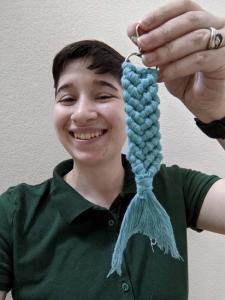 Take and Makes for this project, for ages 9-12, will be available at area PPLD libraries starting Friday, July 16, 2021. Watch the YouTube tutorial here: https://youtu.be/5o6RJm9AMGY

Note: If you are not familiar with macrame knotting, watching the YouTube tutorial is highly recommended. The pdf file below will show all the steps in pictures.