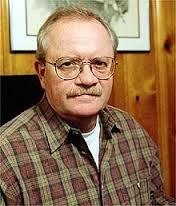 Haruf was awarded the prestigious Frank Waters Award by the Friends of the Pikes Peak Library District in 2012. Kent has received national recognition and awards for his books, The Tie That Binds, Where You Once Belonged, and Plainsong. Eventide won the Colorado Book Award and West of Last Chance, the prose/photo book co-authored with photographer Peter Brown, received the Dorothea Lange – Paul Taylor prize from the Center for Documentary Studies at Duke University.

Check the Catalog for Titles by Kent Haruf