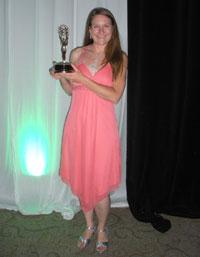 The short documentary chronicles the work of Stan Payne, a Gazette Telegraph employee from 1947 to 1976, and was based on research by PPLD Special Collections Assistant Manager Dennis Daily. The Heartland Chapter Emmy Awards represent excellence in television and media production.

“This is a huge honor,” Hastings said. “There were a lot of great submissions and I’m so thrilled that our piece was chosen.”