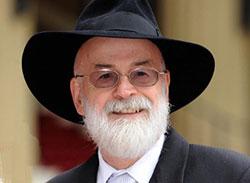 Terry Pratchett, the immensely popular British fantasy novelist whose more than 70 books include the series known as Discworld, died on Thursday at his home near Salisbury, England. He was 66. Beloved by many readers, he will most certainly be missed.

"It is hard for me to believe that there will never, ever be another book from the Disc. For years, I have waited with excitement for the newest installment from Sir Terry's universe. Each new book was better than the last: funny, insightful, and built in an immensely rich world populated with people and places that were real and widely loved. I wanted to visit Ankh Morpork. I wanted to enroll in Unseen University. I wanted to drink scumble with Nanny Ogg. I would have killed to serve in Sam Vimes' Guard. Everyone has some time in their lives when they have a brush with the famous. My proudest such moment is the time I actually had dinner with Sir Terry. He was a lover of libraries, and donated his time to the Boston Public Library for the cost of a Thai Dinner, which I was privileged to share with him. I will never forget it, and I will never forget the happy hours his work brought me. I will miss his voice immensely.

(BTW: I asked Sir Terry during dinner about his favorite character. He was writing Wintersmith at the time, and said that he was currently fascinated by Tiffany Aching. He did say, however, that he most aspired to be Sam Vimes. I told him I knew it. Because I do, too)."