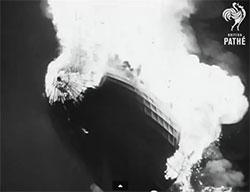 From 1910 until it closed in 1970, Pathé News was one of the world's best-known news agencies. Based in Britain, and indeed originally known as British Pathé, it produced tens of thousands of filmed news reports, covering major stories and events all over the world.

Last week, its entire archive of 85,000 videos was put online, on a dedicated YouTube channel that you can browse and view at https://www.youtube.com/user/britishpathe entirely free of charge. So whether you're interested in coverage of the Hindenburg airship disaster from 1937, Arnold Schwarzenegger winning Mr Universe in 1969, or baby chickens hatching in a frying pan, you'll find it all here.

And yes, the chickens in the frying pan is real. See https://www.youtube.com/watch?v=N7li6AK5QuU for the full report.