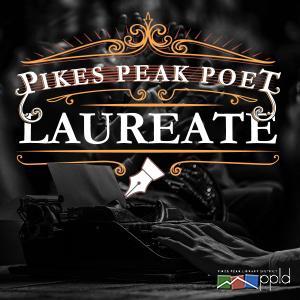 Please join us in welcoming the Pikes Peak Region's new Poet Laureate! This hour long event will feature poetry readings from a variety of local poets, including past Pikes Peak Poet Laureates.

The program will feature: 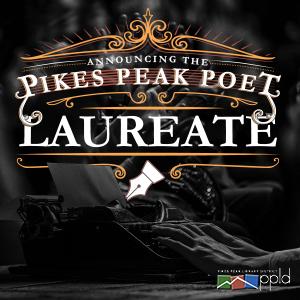 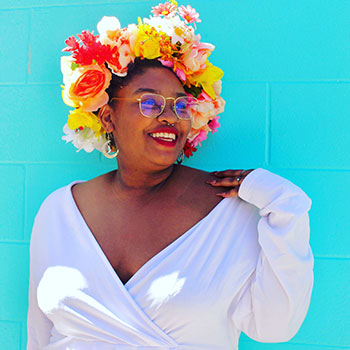 “It is an honor to select Ashley Cornelius to serve as the Pikes Peak Poet Laureate,” said Dustin Booth, project chair and PPLD Manager for Knights of Columbus Hall. “She will be an incredible ambassador for the arts in the Pikes Peak region and her poetry inspires those who witness her work to think deeper about the roles we all play in our community.” Cornelius was selected through a competitive Poet Laureate application and interview process. The Poet Laureate committee contributed to the selection process and included Molly Wingate, Juan J. Morales, Andy Vick, Michael Ferguson, and Susan Peiffer. Cornelius’s two-year term will begin late October. As Poet Laureate she will work closely with the Library District to build a literary arts community through poetry by developing an appreciation of written and performance poetry, as well as inspiring and celebrating poetry and poets in the Pikes Peak region with dynamic programs of engagement, advocacy, and education. “This is an incredible honor, and I am excited to serve as the Pikes Peak Poet Laureate,” said Cornelius. “My intentions are to reach as many people as we can through poetry and storytelling and to be a champion for equity, diversity, and inclusion in our local creative spaces.” PPLD will host an official inauguration ceremony appointing Cornelius as the Pikes Peak Poet Laureate at a celebration on Sat., Oct. 23 at Knights of Columbus Hall, part of the Penrose Library campus in downtown Colorado Springs. The event will start at 6 p.m. and will feature presentations by a few rising stars in the Colorado Springs poetry community, pieces by previous poet laureates, and a keynote presentation by Cornelius. 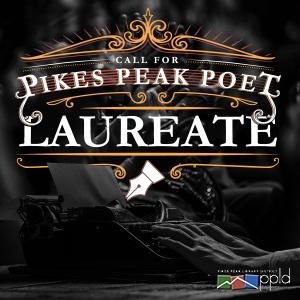 PPLD is proud to announce the return of the Pikes Peak Poet Laureate Program! We will be accepting applications for the position from Thu., July 15 to Sun., Aug. 15.

The Poet Laureate builds a literary arts community through poetry by developing an appreciation of written and performance poetry and inspiring and celebrating poetry and poets in the Pikes Peak Region with dynamic programs of engagement, advocacy, and education.

Printed applications can be submitted at any PPLD Location. 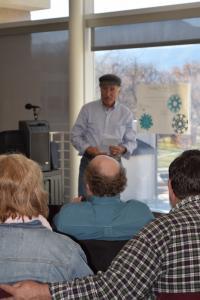 This is the 2nd poetry and warming clothing give-away that the Pikes Peak Poet Laureate Project has held at Penrose Library.

Many thanks to KCME for sharing the audio with us!

Koyoonk’auwi (Concow) poet Janice Gould was the Pike’s Peak Poet Laureate for 2014-2016. Her poetry has been published in over sixty publications, and has won awards from the National Endowment for the Arts, the Astraea Foundation for Lesbian Writers, the Pikes Peak Arts Council, and from the online publication Native Literatures: Generations. Her books of poetry include Beneath My Heart, Alphabet, Earthquake Weather, and most recently, Doubters and Dreamers, a finalist for the Colorado Book Award for 2012, and for the 2012 Binghamton University Milton Kessler Poetry Book Award. She is the co-editor, with Dean Rader, of Speak to Me Words: Essays on Contemporary American Indian Poetry. In March 2012 Janice completed a Residency for Indigenous Writers at the School for Advanced Research in Santa Fe, New Mexico. A musician as well as a poet, Janice plays guitar and accordion, and helped found and performed with Trio Pan Dulce in Portland, Oregon. She earned her Ph.D. in English at the University of New Mexico, and more recently a Master’s in Library Science from the University of Arizona. Janice is an Associate Professor in Women’s and Ethnic Studies (WEST), where she developed and directs the concentration in Native American Studies.

Here are some poems:

Price Strobridge Highlighted in The Gazette

"Two residents approached as we were leaving and said, 'thank you so much for bringing poetry to us!'"

The love that soars out from you,
Returns on the arms of the singing wind
Price Strobridge - Boomerang 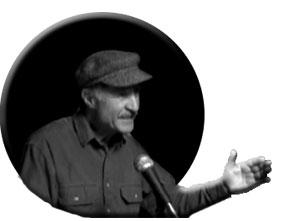 “Art is a community force,” asserts Price Strobridge, who currently wears, in his words, the “poet’s tunic.” He was recently named this region’s third Pikes Peak Poet Laureate. His journey there wasn’t textbook, but it would make a great novel. Or at least chapbook.

“My father abandoned us,” he recounts of his early years. He lived for a time at the Myron Stratton Home, making him “the progeny of the gold miner” Stratton, who struck it rich in Cripple Creek in the 1890s and funneled much of his earnings into the formation of Colorado Springs and bequeathed funds to establish the home for the poor that still bears his name.

Strobridge’s high school English teacher assigned a reading of the prologue to The Canterbury Tales, and he can still “feel the music and those syllables rolling around.” He also cites Poem #15 of Lawrence Ferlinghetti’s Coney Island of the Mind as an early influence.

In his 20s, Strobridge watched the film Dr. Zhivago and fell in love with Russian poetry, especially the works of Andrei Voznesensky and Yevgeny Yevtushenko. He has also found inspiration in the work of Emily Dickenson, the essayist Thomas Carlyle, and the scientist Nikola Tesla.

He has driven contracted rural mail routes near Fowler, Colorado and currently lays carpet, proudly “self-employed for 43 years.” Carpet-laying demand is heavy after the recent hail storm and ensuing flooding, so business seems to be good. He fielded several carpet-related calls during a recent interview, and another call from his wife, his “main muse” and “CEO” who illustrated his lone published book Unmasking the Heart.

His tunic comes with the phantom weight of unworthiness. Because he did not attend college, he humbly felt unqualified when he was named laureate, a position normally filled by traditional scholars. “I read here and there and bounce around like a fly. I’m not a real poet.” But advice from local poet Malcom McCollum helped: “Get over it, Price. We are all self-taught.”

Strobridge partly educated himself while “crawling on floors,” laying carpet and listening to audiobooks checked out from PPLD, including works by Robert Graves, W.H. Auden, T.S. Elliott, and Robert Frost. He is fond of reciting “I got my degree / In poetry / From PPLD.”

He also learned from other local poets, who he calls his “professors,” such as previous poet laureates Jim Ciletti (a gardener/chef/poet who conveys “a sensate burst of joy. He paints that plum” with words) and Aaron Anstett (“a real energetic voice” who enlivened the local poetry scene upon his arrival just over a decade ago).

The tunic-wearer now looks to offer similar encouragement to younger writers. “The art’s coming out of their pores! They’re a voice that hasn’t been recognized.”

So what advice does our Poet Laureate offer writers of all ages? For one, write when you are inspired. “If you don’t spear, or bring to earth, or clip its wings,” a poem will be lost. Also, “hear hints of rhythms in a waterfall.”

The Pikes Peak Poet Laureate Project is a partnership between Pikes Peak Library District, Colorado College, University of Colorado at Colorado Springs, the Cultural Office of the Pikes Peak Region (COPPeR), and Poetry West. “The Fledgling”
by Price Strobridge

By words the mind is winged.
~ Aristophanes

Unfledged,
unlaurelled molting heap,
heaped on the leveled ground,
grounded by gravity of self,
he wore no gold-edged tunic,
perched heavily,
like a thick book
on a narrow shelf
unopened,

then,
spreading full wings
to the wind in the words
rode up the thermal gust
to soar.

Below him,
the world fell away,
sloughed-off
like fledgling down.